Remembrance, reflection – and being thankful.Donald Sinclair - spinning wheel maker of ArgyllWelcome to my new blog spotIndex

Skye, Dalmally - and a masterclass!

It has been a while since my last Blog but the interval has been very busy, fulfilling and fun, and accompanied by the sunniest summer for many a year. Indeed, instead of being worried that I had forgotten a rain jacket, this summer it has been a panic if sunscreen and a bottle of water were not in the bag when venturing out. At the end of June, I was very excited to be journeying to the Isle of Skye with Sgioba Luaidh Inbhircluaidh to waulk a 19 metre tweed which had been woven by Skye Weavers as part of the Lamb to Loom and Beyond Event. Then, only weeks later we had another tweed to finish at Dalmally, Argyll, as part of the Clan MacGregor Gathering at the invitation of Liz Gaffney-Whaite of Heartfelt Studio, Dalmally Station. Frances Dunlop, our group leader in Sgioba Luaidh Inbhircluaidh has very comprehensive write ups and photographs of the Waulking of tweeds 8 and a 9 (and, by the time I write this, number 10!) in the News section of our website (link to news page here) and also of our Big Waulk in Dunoon recently.

But, back to our adventures in Skye. We meet some wonderful and interesting people on our travels with Sgioba Luaidh, and Skye was no exception.

Some years ago  I had been given an item (a stick with a rudimentary hook carved into the tip and a shoulder “step” about 1/3 of the way down the length) which the owner advised had belonged to her sister-in-law's Granny on Lewis. It was, she believed, used to ply wool and involved the use of a hook in the roof beam over which the yarns to be plied were slung before being attached to the “stick”. She said, as I was a spinner, I would know what to do with it! I hadn’t really got much of a clue – apart from using it as a drop spindle, and in doing so I discovered it had a bias towards spinning in an anti-clockwise direction, which is usually the direction used to ply yarn which is normally spun clockwise initially. It was a bit of a puzzle to me.

On another occasion, while giving a talk on spinning I mentioned this “stick”, or 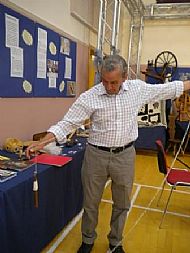 fearsaid in Gaelic and explained how I had been told it was used. A gentleman in the audience remarked he remembered his mother and granny using one and the children were warned not to let it hit them on the head or it would stunt their growth! He agreed that the process involved the use of a hook in the ceiling too. ( I suspect the warning was to keep the children out of the way while the important work was being done!)

I had taken my fearsaid with me to Skye and, whilst in conversation with Dòmhnall Angaidh,  a member of one of the first families to settle in Portnalong from Harris, I showed him my fearsaid and his eyes lit up “Oh I haven’t seen one of those since I was a wee boy! My Gran used to let me use it and I enjoyed it.” I asked about the hook in the roof. He didn’t remember that part, but proceeded to demonstrate the action for plying with only few moments of practice.

Easy when you know how!

Here is an old film of a Norwegian Farmer using what looks an identical, though larger, version of the fearsaid. It’s a silent film, and the section of interest is at about 5.51 for spinning and about 7.01 plying.

And for fun here is another video from Scandinavia, showing waulking being done by water mill – a lot more dangerous than the hand waulking we do – and no songs or much fun either I think.

Promise that next blog will not take so long to deliver.

Please note that whenever you submit something which may be publicly shown on a website you should take care not to make any statements which could be considered defamatory to any person or organisation.