Not a spelling mistake! Waulking (in Gaelic luadh) is the technique of 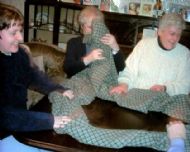 finishing the newly-woven tweed by soaking it and thumping it rhythmically to shrink and soften it - all done by hand in the old days. The songs served to keep the rhythm and lighten the work.

Waulking was the final stage in the long, laborious process of producing homespun woollen cloth.

Here is a very brief account of the waulking process, in an interview for the Music Department of the Open University.

When Harris Tweed comes off the loom it is stiff and rough, and the weave is quite loose. Waulking thickens and softens it. Nowadays, of course, this is done by machinery, but formerly everything was done by hand - or even feet! We have never tried to do a foot-waulking - yet! 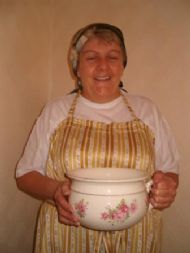 The cloth was soaked in what we call "household ammonia" (stale urine!) This useful chemical, known in Gaelic as maistir, helped make the dyes fast, and to soften the cloth. (We must admit: our performances are not competely authentic - we don't use maistir!)

For the women-folk who took part, waulking was an enjoyable social occasion, with plenty of fun and gossip as well as hard work. Sgioba Luaidh (Waulking Team) try to capture the authentic atmosphere, sometimes with hilarious results!

On several occasions Sgioba Luaidh have done a full waulking to shrink a "raw" tweed. We are very grateful to the weavers who have donated tweeds to us for this purpose. (We do our best not to ruin their lovely cloth!) Click here for a full description of one of these events.

Waulking was a widespread practice, but it seems that only in Scottish Gaelic culture was it accompanied by singing. Or, at least, it is only here that the songs have survived.

This was a very ancient tradition, and some of the songs are centuries

old. Being passed on orally, they have been transformed into many differing versions, which adds to the interest - but can also be quite frustrating as we agonise over which beautiful version we prefer!

Many of the songs are loosely structured - in order to make a song last long enough for the work, lines might be imported from another song, or perhaps a few lines of improvisation could be thrown in.

One woman sings the verse of one or two lines. It seems effortless, but takes a lot of skill and practice to get the timing exactly right! The rest join in the chorus, which in the oldest songs are composed of meaningless vocables. Later songs may have some words in the chorus as well.

The waulking would begin with a slow song, increasing in speed as the cloth dried, and the women got warmed up. In Uist and Barra, after being waulked the cloth was rolled up, and patted to smooth it out to the accompaniment of a clapping song (oran basaidh) which was a fast, cheerful song, sometimes an improvised "pairing off" song, when the names of those present would be linked with local young men.

Since waulking was such an important part of female culture, women wishing to make a song would compose it as often as not in waulking-song style, whether a love song, lament, praise of the clan, or the homeland, a lighthearted, "fun" song - anything that was part of everyday life. We love these songs because they are "real" - straight from the heart, full of passion, but utterly without sentimentality.

Waulking died out in the mid-twentieth century, but the songs are certainly worth preserving, and they really need to be "worked" to bring them alive.

The whole process was - is - very therapeutic. In the songs you can express your every emotion; the hypnotic thumping of the cloth on the table helps to release all your tensions and frustrations (and it's very

good exercise!); in the company of your friends you can have a good gossip, and talk over problems. It's great "female bonding"! And cheaper than counselling!