2018 was the year of three tweeds! Unforgettable was our sojourn in Skye, where

we took part in Lamb to Loom …  and Beyond in Portnalong. (We were the Beyond!) We had the joy of waulking a new tweed, all 20 metres of it, woven by Skye Weavers, from the wool of local sheep. And afterwards we visited the Weavers in Glendale to hand back the finished article. Our Catherine was able subsequently to buy a poncho made from “our” tweed. Very nice it is too! something very special for her to parade in! We were blessed with a great summer, so Skye was looking its glorious best. Those of us who had never been to the island before were well impressed! We can re-live our Skye adventure by clicking here.

Thanks to our friend Liz Gaffney-Waite, we had the chance to waulk two more tweeds, one of which we did at the MacGregors’ Clan Gathering at Dalmally Community Centre. For the other one we travelled back to Dalmally and waulked it on the platform of the railway station, where Liz has her studio (Heartfelt by Liz). A unique experience! We think the passengers in the trains thought so too! We have now waulked ten tweeds, and claim to be the only extant group who have done so many. (Unless, of course, you know different!)

As if waulking three new tweeds wasn’t excitement enough, October brought a further highlight when we took part in a Big Waulk with Clò nan Nighean from Barra and Còmhlan Luadh Bhàideanach, who were in Dunoon to take part in the Mòd. A long-talked about project, which finally came to fruition. It was a brilliant experience to waulk with like-minded people and enjoy each others’ songs. There were two dozen of us at the board. We had fun! You can see a video here.

During the year we took part in some other special events: Clanscape at Ardess on Loch Lomondside; Lochgilphead Pictish and Celtic Festival; Museum Memories in Paisley, marking the closure of the museum for refurbishment; Gaelic Awareness Day in Greenock’s Oak Mall. And we had another Hebridean trip when we sailed over to the Isle of Cumbrae for a meeting of Millport Historical Society.

We had our regular visits to Auchindrain Township, with some special days laid on for Knitting Tours from Ireland. A new, interesting partnership!

As usual we had a number of engagements with Guilds and SWI in far-flung places like Dalry, Elderslie, Ayr, Alexandria (a school visit), Alloway, Dolphinton, Rutherglen, Troon and Bothwell. We finished the year in style with a fabulous St Andrew’s Night in Priory Church, South Queensferry, an ancient church, practically under the bridges. Frances was delighted to have the chance of singing puirt á beul for two step-dancers. Slightly scary, but very satisfying! Scary, because they only had one practice – over the phone! – and a quick rehearsal in the kitchen before the ceilidh! Satisfying, because when the steps mesh together with the songs it just feels so right! 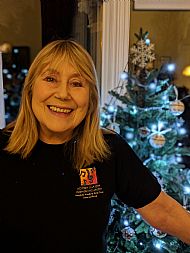 The last, very good news of 2018 is that Dr Anne Lorne Gillies has graciously agreed to be Honorary President of Sgioba Luaidh Inbhirchluaidh. In fact we owe our existence to Anne, because it was at her summer schools in Stirling many years ago that Frances first learned about waulking, and caught the bug of traditional Gaelic song. So if Frances is the group’s “mother”, Anne is our seanhmair! Also, she it was who recommended us to the organisers of the festival, Nastarsze Pieśni Europy (The Oldest Songs of Europe) in Lublin, Poland, where we spent an unforgettable few days. Anna chòir, tha sinn fada, fada nad chomain. Fàilte do Sgioba Luaidh Inbhirchluaidh!

We are now enjoying an unusually long break, as we have had a very busy year. And are looking forward to another one! We wish all our friends and supporters a happy and peaceful 2019, with plenty of laughter and song. Tha sinn a’guidhe dhuibh uile slàinte, sonas agus sìth, le ceòl is craic gu leòr anns a’ bhiladhna a tha romhainn.